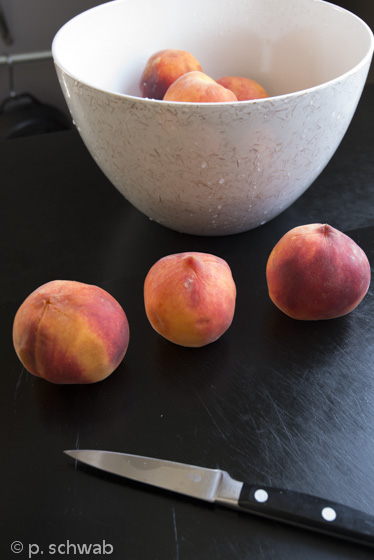 Since I spotted the first ripe local peaches at the farmers market a couple of weeks ago, I’ve been dreaming about  peach preserves. That’s somewhat surprising as I’m not typically a big jam person. However, lately, non-gardener has been making a lot of oatmeal for breakfast – something, believe it or not, of which I’m not a huge fan. Grits, cream of wheat, farina, cream of rice – love them all. Oatmeal, not so much. To make it more appealing, I cover my allotment of cooked oats with  homemade yogurt and fruit preserves. Except commercial fruit preserves, even the high quality ones, are so stiff with pectin and ultra-sugary, that I’m not actually a huge fan of those, either.  I much prefer the low sugar, almost tart, loose and sloppy style of fruit preserves that most jam makers consider a failure. Fortunately, sloppy jam making is super easy: fruit, lemon juice, sugar.

So, I went in search of local peaches. One of the local orchards was selling their prime peaches at the market for $10 a basket (around 4.5 pounds). But they also had a box of the rejected, slightly bruised and marred peaches hidden under their table that they were willing to part with for $3. So, I was able to take home 8 pounds of local peaches for $13. The best, most fragrant peach was set aside for later and I blanched, peeled and sliced about 2 lbs for the freezer (to wet pack, I just sprinkled on some lemon juice and sugar and let it all sit until enough juice was drawn out to cover the fruit, then packed it up into freezer bags). 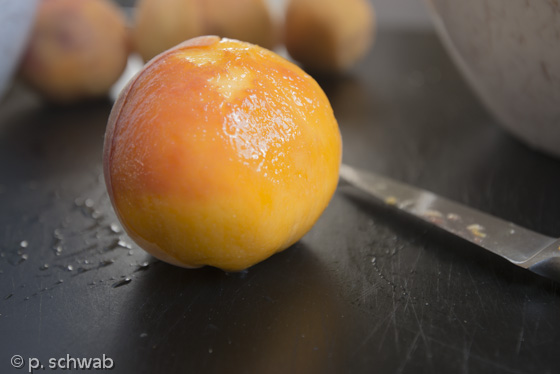 Then came the jam making. Same drill: blanch, peel, slice, then let the fruit sit with some lemon juice and sugar (about 1 1/2 cups sugar to 4 lbs prepared fruit). Except later in the evening, it all went onto the stove to cook. About 45 minutes later it was starting to jell when it hit a cold plate, so I stirred it in some fresh lemon basil from the garden and ladled the hot glop into sterilized canning jars. The jars went into a boiling water bath for 15 minutes and voila, summer in jar (5 half pints total): 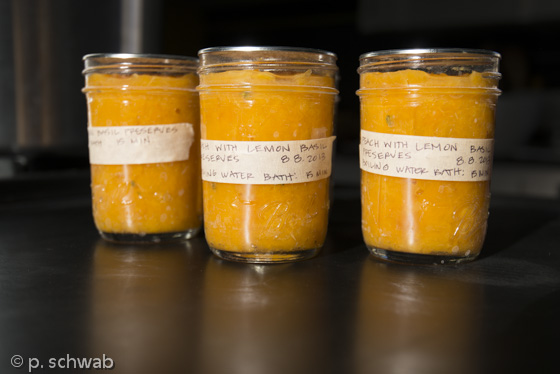 Meanwhile, If I’m in the kitchen working on one project, I might was well be working on two. Peach season coincides with tomato season, which coincides with cottage cheese season. Fresh ripe tomato on slightly salty cultured cottage cheese – sublime. And at this time of year the house is always at the required 76 degrees needed to culture the milk properly, so no elaborate bowl swaddling needed. I think cottage cheese is actually easier than yogurt when the weather is cooperating. So, a half gallon of un-homogenized whole milk (the same milk I use for yogurt making) is poured into a preheated glass bowl. When it has warmed to 76 degrees F, I stir in a 1/4 cup buttermilk, cover it and forget about it for 24 hours. 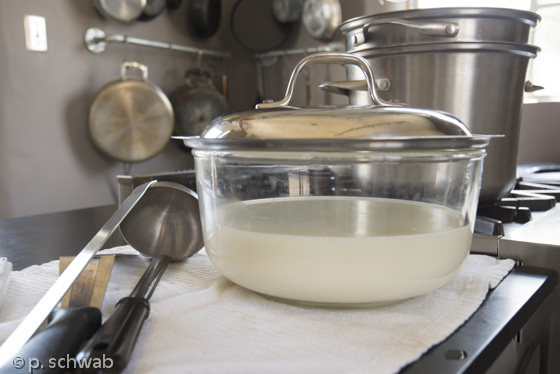 The next day, I scrape off the now-cultured cream that has risen to top (some decadent, no added trouble, creme fraiche for that fresh peach I set aside) cut the curd and heat very slowly over a water bath. Stir every 5 minutes until the curds are 120 degrees F, have firmed slightly and separated from the whey. Drain in butter muslin, rinse, stir in some salt, done. Well, you could drizzle a little cream over the dry curds, should you choose. I get about 2 cups of dry curds from a half gallon of milk, but as you can see, spoons dig around in the jar frequently, and it doesn’t last too long. 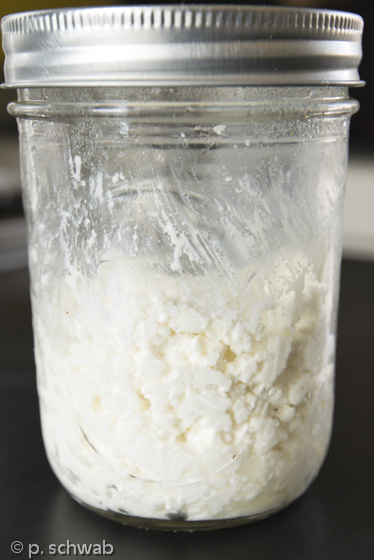 One Reply to “How I spend Summer Nights in the Kitchen”