for the queen bee.

My surviving bee colony, H002, has been doing really well this Spring. They built up quickly once the weather warmed, and the queen has been laying in a nice even pattern. Since this colony has been very strong and enjoyable to work with, and I have an empty hive, I decided to see if I could induce the colony to raise a new queen for me so I could split the hive in two. I know there are more reliable methods for raising queens, but I wasn’t feeling ready to tackle any of the more refined techniques. Instead, I decided to try and induce swarm behavior, but split the hive before the swarm actually occurred. I know, risky, in case I mistimed the whole operation, but for a newbie beekeeper it seemed like the easiest method. So, instead of spacing the combs in H002, to give the bees plenty of room, I placed a follower right behind the last comb in the colony. They had expanded so quickly they were already using a couple of the empty combs I had given them from the dead out hive. By last week, they were raising brood on 13, out of 18 bars, and were quickly filling up the remaining combs with nectar. There was also a lot of drone brood. These were all good signs that the colony might be feeling like it was an auspicious time to send the old queen off to find a new home. 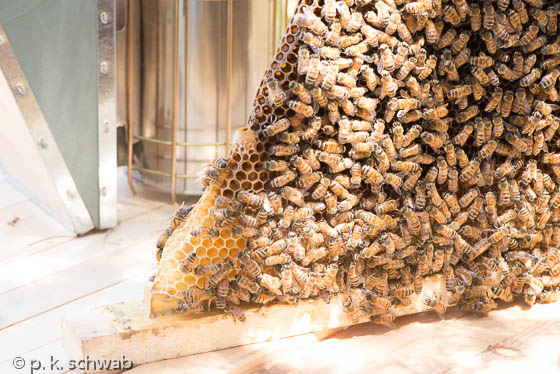 Indeed, when I opened the hive yesterday there were queen cups on the edges of 6 of the brood combs. Unfortunately, the lighting wasn’t very good and I couldn’t tell if any of the cups were occupied, so I closed everything up and went back in today. This time I was prepared with a small flashlight and could see eggs in most of the cups. Actually, the cup I was able to photograph has two eggs in it. 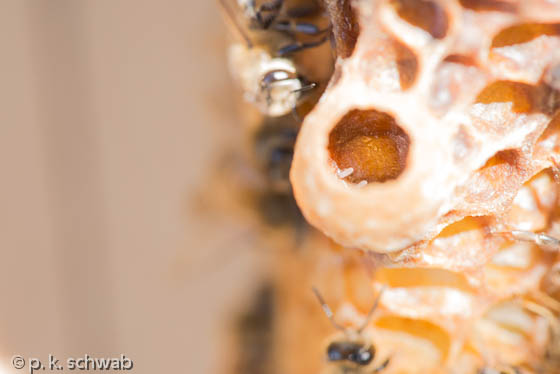 Now that I had good evidence that the hive was fully ready to raise a new queen, I started the split. I had read through the instructions in my reference books earlier in the day, so hopefully I remembered everything. The tricky bit was finding the queen. Of course that little hider was on one of the last combs I inspected. While I was working my way through the hive searching for the queen, I set aside three combs that had mostly capped worker brood, plus a comb with a queen cup, as insurance. Those bars, plus the comb with the queen went into a nuc box I had placed next to the hive. I also took two combs that were full of nectar. I tightened up the remaining bars in H002 and gave them a few bars of empty comb – I have a ton of empty comb stashed away from when I cleaned out Hive 001. With the hive secured, it was time to transfer the split into the H001. I was really nervous that somehow I’d lose my queen in the transfer – she’d fall off the comb or get squished between the bars. Hopefully that didn’t happen. I didn’t spot her while I was making the transfer, but the nurse bees all seemed to content to be in their new home, so hopefully she made it in there with them.

Now the waiting begins. With my fingers crossed, I’ll leave both hives alone for 10 days, then go in to see if the queen cups in H002 are capped, and if the queen is laying in H001.