First, usually, you hear the loud hummbuzz drone. That caught your attention, now you look up and see the thick cloud of bees in the air above: 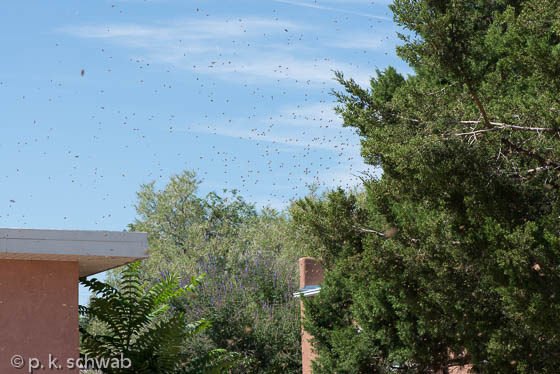 and a cluster of bees around the hive entrance: 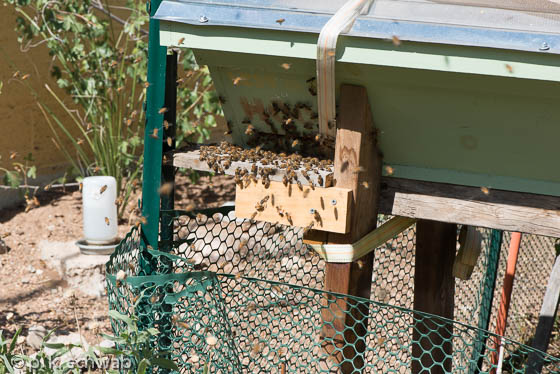 I’m sure it’s intimidating, and maybe even terrifying, for folks unfamiliar with honeybee behavior and schooled on B horror films. The first time I saw this seemingly frenzied mass exodus from a hive, I was a little freaked out. However, after I spent some time watching, I realized it was just a big new batch of forager bees trying to figure out their place in the world. Some of the bees are hovering, facing the hive entrance, and others are flying in increasing spirals, away from their hive. This is so they can memorize the location of their home prior to flying off to the far and wide to gather supplies. After a bit, maybe 20 or 30 minutes, the big cloud of bees disperses and things go back to normal.

On a nice summer day, normal activity around the hive is usually limited to an orderly coming and going on a single flight path. Sort of like arrivals and departures at a busy airport: the bees fly home way up high and descend as they circle to line up for their landing. Once down, they’ll debrief at the entrance, offload and after a bit, take off again. This orderly traffic flow is hardly noticeable in a small bee yard, unless you happen to be standing right in the middle of the landing path, in which case there may be a steady stream of bees bouncing off your head – no they don’t get angry at the human obstacle, they just right themselves and course correct.

However, this every-so-often-giant-group-of-bees-orienting-themselves-all-at-once thing, that’s one of the reasons a bee yard might be a less than desirable neighbor for some folks. I’m lucky in that my backyard neighbors, the ones that are most likely to be impacted by the cloud of buzzing bees zooming overhead, think its pretty nifty having honeybee neighbors. However, even with understanding neighbors, I’m pleased when the mass orientation happens on a weekday, when the daytime neighborhood population is lower.