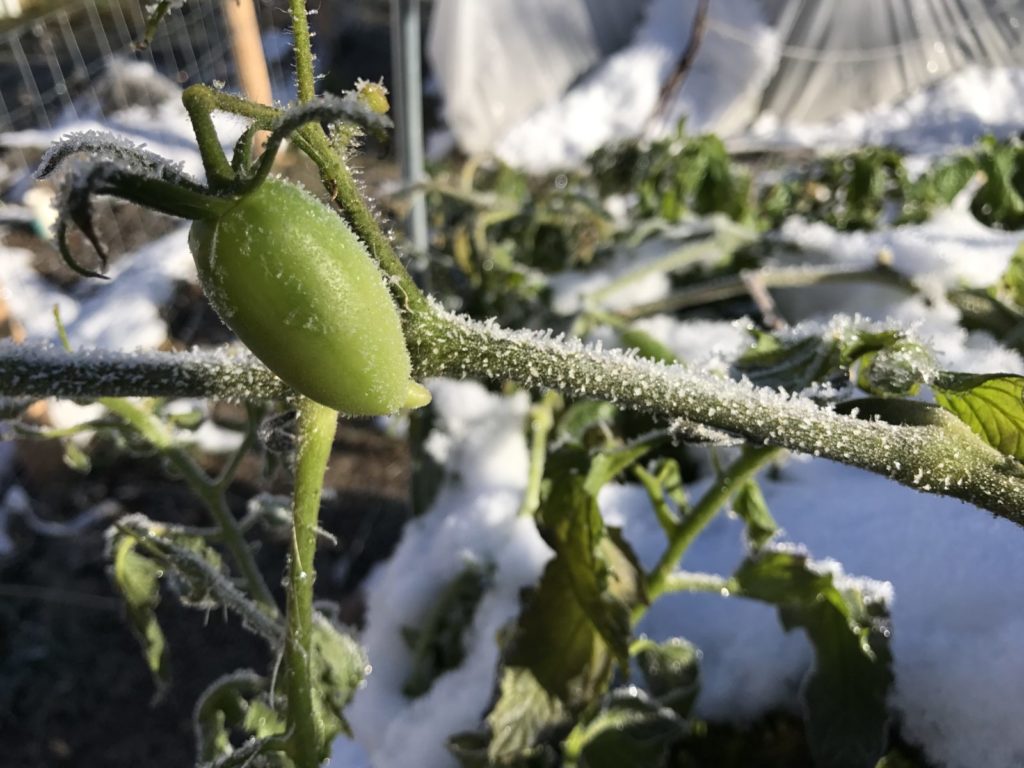 The sun is out this morning and, already, most of the snow that fell yesterday has melted. Last night’s low was 23 F, but in a few days we’ll see 70 again. Yup, that’s Western weather. I scrambled Sunday afternoon to glean everything I could from the frost tender vegetable plants before the season came to a hard stop with 5 inches of snowfall. I ended up harvesting about 18 lbs of green and partially ripe tomatoes. Several of the plants yielded more green tomatoes than I had harvested ripe during the season. The two San Marzano plants were the biggest culprit. I harvested 8 lbs of green tomatoes to just 6 lbs of ripe tomatoes over the past two months. I love San Marzano tomatoes. For a paste type of tomato, they are surprisingly sweet and tasty when eaten fresh. I like to slice them in half and sear them on the cast iron griddle, English breakfast style. However, I may need to experiment with some other tomato varieties more suited to the cool nights and short growing season here. One tomato variety that will remain will be the Brandywine OTV.  I purchased the seed last year hoping it would be more disease resistant than the other varieties I had been growing. The tomato lived up to its reputation. I was able to harvest about 7 lbs of ripe tomatoes and 3 lbs of green tomatoes from one plant. The plant continued to look healthy while several of its neighbors  were clearly suffering from various issues, and it produced beautiful, unblemished, tomatoes when most of my other large tomatoes were cat-faced and cracked. Oh, and it tastes pretty good too.

All-in-all, considering the late start and less than ideal soil conditions, I’m quite pleased with my harvest so far this year. My records indicate I’ve harvested about 125 lbs of produce since mid July. For the past month or so, the only vegetables I’ve purchased have been potatoes, onions, garlic and mushrooms, and next year I should have all of that growing. Yes, even some mushrooms.

The big performer in the garden was the single Tender Gray zucchini plant which produced over 20 lbs of squash (as compared to the Golden Scallop squash which produced only 2 lbs). The big disappointment was the beans, all of them. Even though I applied inoculant to the beans prior to planting, none of the plants produced anything more than a token harvest of a few bean pods. One bed of snap and dried bean plants was clearly suffering from Mosaic Virus and did not produce at all. I suspect I introduced the virus via saved seed, although several of my tomato plants also seemed to be afflicted. I think I will purchase all new beans seed next year to see if that helps. I’m already anticipating poring over all those pretty pictures in the online seed catalogs!

For now, there’s plenty to keep me busy. I have one last batch of ripe tomatoes and tomatillos to roast and freeze. When the ground dries out a bit, I’ll start clearing out the rotting plant debris and plant the garlic and cover crops. My cool weather vegetables still need to be tended – there’s always plenty of weeding to do, even when the days are short and cold. Right now, the Fall garden is tucked in, all cozy under row cover, and I should be able to get another month or so of growth before everything goes dormant during the shortest days. I’m looking forward to the new autumn menu full of roasted turnips, leeks, beets and tasty salads.