As predicted, with only ten days to go before we depart LessisMore south for, literally, greener pastures, things are super hectic. To make things even more complicated, I’ve been mining my existing gardens for plants to transplant into the large, mostly grass, yard in my future. I’ve been dividing as many herbs as I can, while also digging out seedlings and extra native perennials and shrubs. 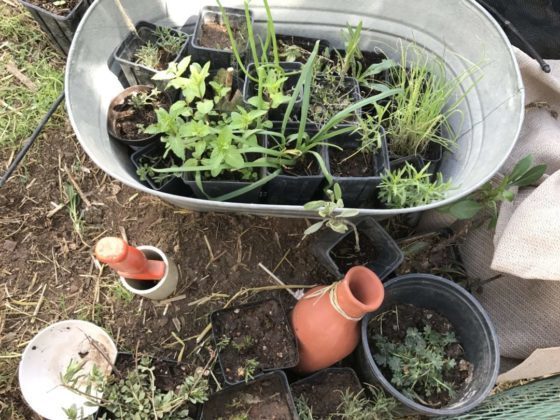 In the meantime, I also have a honeybee split to keep an eye on. Due to my travel plans, I ended up making the split under less than ideal conditions. I didn’t feel like they were quite ready, but also didn’t want to chance losing a swarm while I was gone. So I split, and as it turns out, I think everyone is doing well. I couldn’t find the queen when I did the split, so ended up pulling out 12 combs of mostly capped brood and wet nectar, but also some younger brood, and a couple of combs with queen cups. I pulled 12 bars total, and left 16 in the original hive. I opened that hive when I returned, eleven days later, and was pleased to see uncapped larvae, and then, of course, no surprise, the queen. The split seems content. They’re expanding and the queen still has a nice even laying pattern. In the meantime, I think a new queen has successfully hatched in the old hive – I spotted what looked like the discarded tip of a queen cup dragged out onto the landing board two days ago. I did a very quick partial inspection of that hive when I returned, as well, and saw, three bars from the front, a cluster of capped queen cups, supercedure-style, on the lower edge of a comb. I didn’t inspect past that point, to see if there were more, but I was happy to see at least a few capped cups. Although, given that they were clustered in that one spot confirms my hunch that I was a few days too early with the split, and the preexisting queen cups were not yet occupied. Instead, the bees had to up-size some existing larvae cells when I stole their queen. I’ve been keeping close tabs on the hive to see if they decide to cast out a virgin queen swarm despite the split. The hive is still bustling with activity. Every afternoon the two colonies send out the new foragers on an orientation flight around 2 pm, and there is quite an impressive cloud of bees in the air:

Today was a big day for the three week old chicks! I expanded the brooder enclosure out the garage door, and Ezzie and I babysat the chicks during their first exposure to the big scary outside world. It took about 10 minutes for the bravest chick (Dora) to set foot into the expanded universe, but once the first chick crossed the threshold, everyone turned brave and there was lots of running back and forth. Lemmy took advantage of the patch of gravel to enjoy her first real dust bath:

The chicks will probably remain in the garage brooder for another week or two, with more excursions into the driveway. Having a nice big brooder box means I can delay moving them outside. In the past, when I had much less brooder space, I felt like I had to rush the chicks outside before it was ideal. Of course, moving them into the outside coop is contingent on me actually finishing the construction of the new coop. The process has dragged on for a lot longer than I anticipated due to lots of cool, rainy, windy weather and lots of other demands on my time. Spring is always so hectic. I did manage to get the tomato plants in the ground last week: 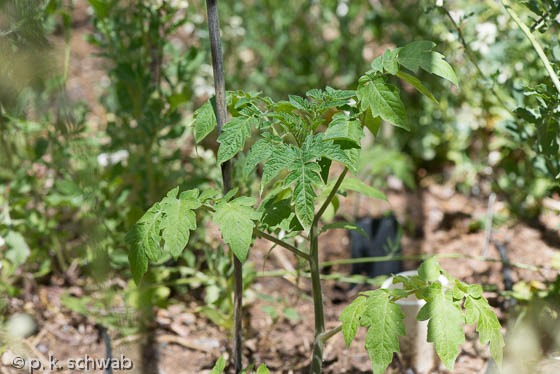 But I was a few days late getting the garden beds covered with bird netting. Once again, my peas were trimmed significantly: 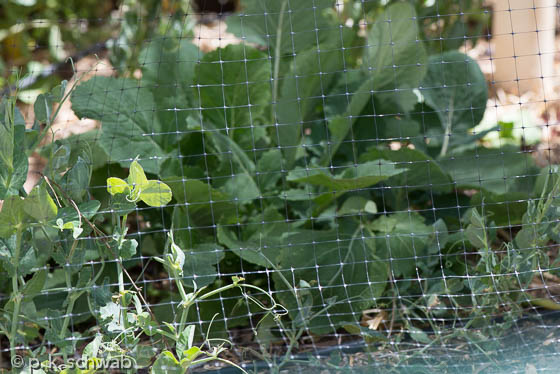 Fortunately nothing other than aphids seem to find fava foliage tasty: 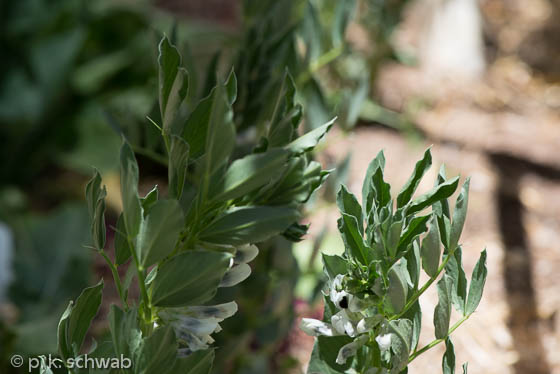 I’ve been managing my fruit crop by thinning the crop of newly formed peaches and pinching off the extra shoots on the grape vines. I pruned the fruit trees and vines back in February – I’m still not super confident in my fruit management techniques, but thanks to the wealth of Extension publications, I feel like I’m slowly learning. I still need to make a second pass at thinning. It’s easier for me to thin twice. It’s hard to have the discipline to remove enough of the fruit the first time around. 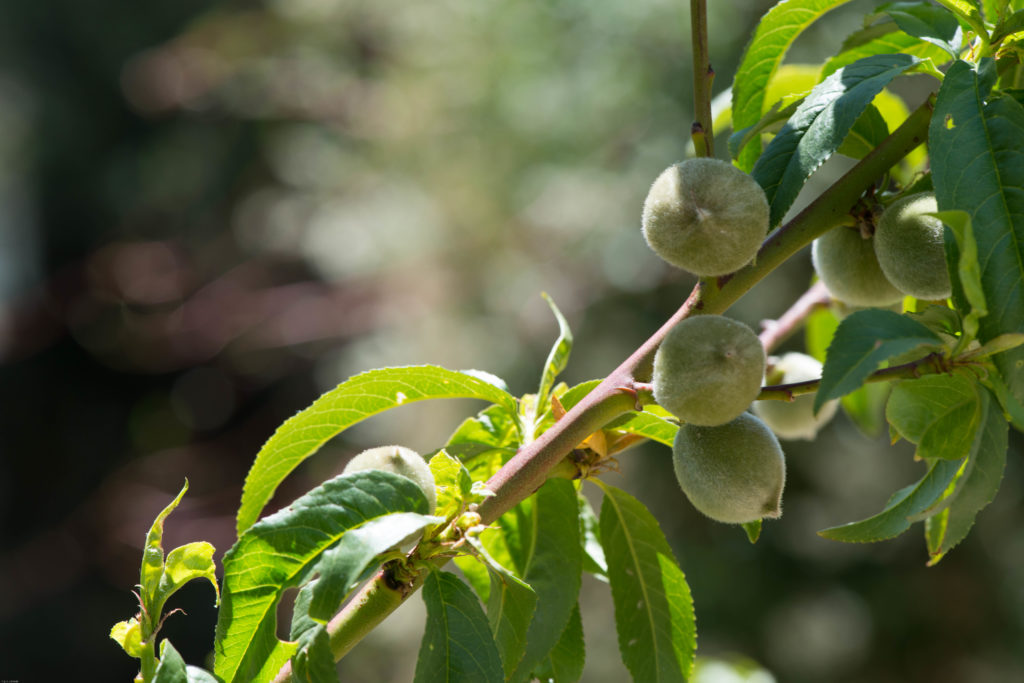 Given all the work required to get the edible plants sorted out this time of year, I’m happy that the front yard can cruise along on its own, without much interference from me. Lots of stuff has started to bloom and we’re only a couple of weeks from the full-on riot of spring color: 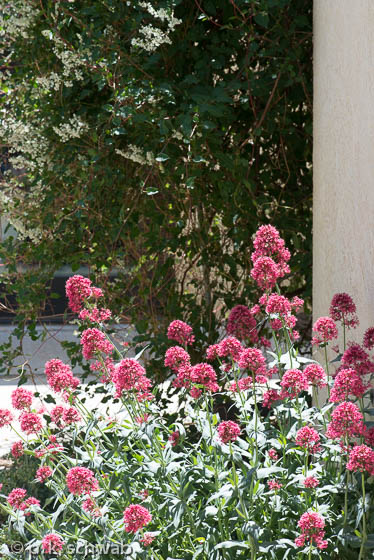 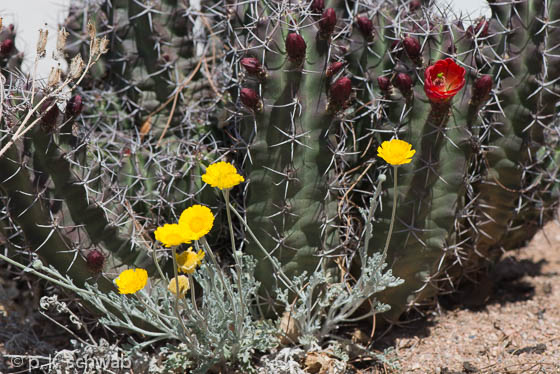 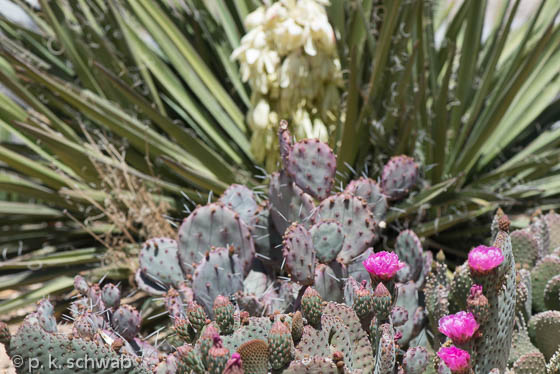 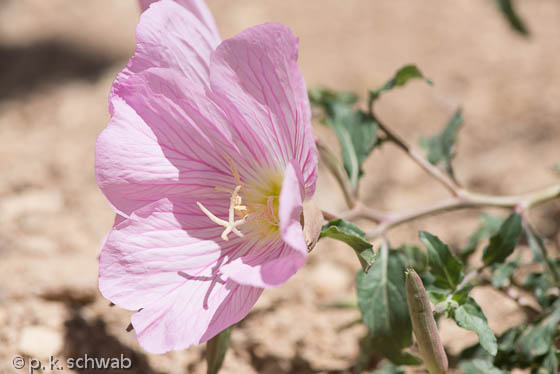 A few days ago I was talking gardening with a friend who is getting ready to start a whole new garden at a new house. She’s leaving an incredibly lush (heavily irrigated) Mediterranean style garden, but expressed concerned about taking on another larger water bill at the new digs. Well, as you’ve probably figured out, I have a bit of a reputation as a water miser zealot around the ‘hood. However, I try not to ram my particular take on life down the throats of my friends (much), so I tried to frame my thoughts on the topic in a helpful (rather than self-righteous) tone. I suggested that when planning the new garden, my friend should really pay close attention to plant selection – that often times there is a more heat and drought tolerant plant that can take the place of a familiar garden favorite. Case in point: one of the favorite big ol’ flowering plants in my front yard  is prickly poppy (yes, I know, I’ve shown you this before): 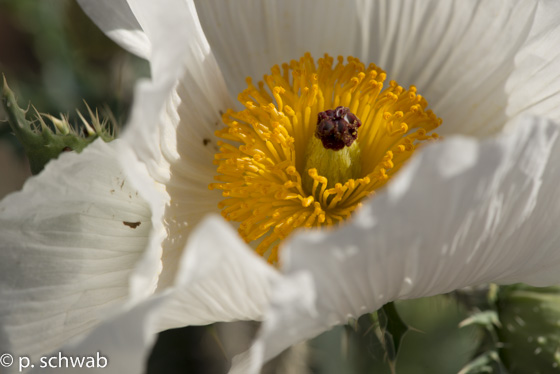 While it lacks the lurid colors and early blooms of the Asian poppies, it is no less dramatic. The large 4″ flowers at the end of the tall spiny stalks flutter beautifully in the breeze,  and this Western native grows here with a lot less fuss and no irrigation. While the plants can be a little tricky to get established (they’re tap rooted, so dislike being moved), they thrive on very little water. The two plants I managed to grow from seed in the front yard survive brilliantly on rainfall and the bit of extra runoff they receive from the adjacent sidewalk. This is one of the front yard flowers that inspires the dog walkers and joggers to stop and admire. Oh, and these guys like it too: 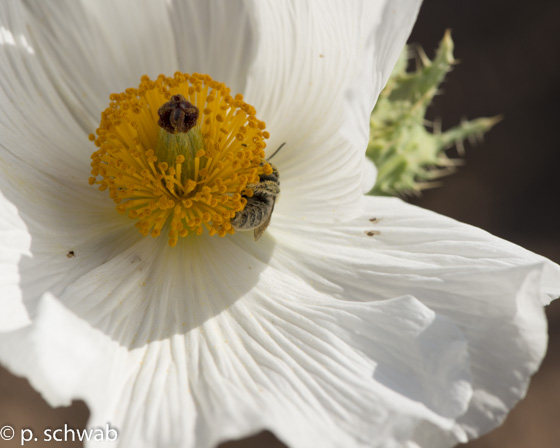 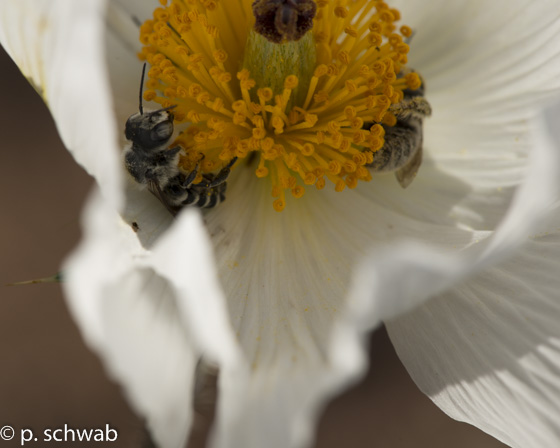 It’s that time of year again, when everything is going all out. There are mad dashes of color everywhere: 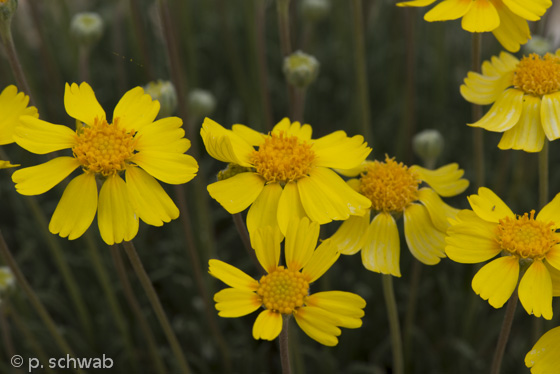 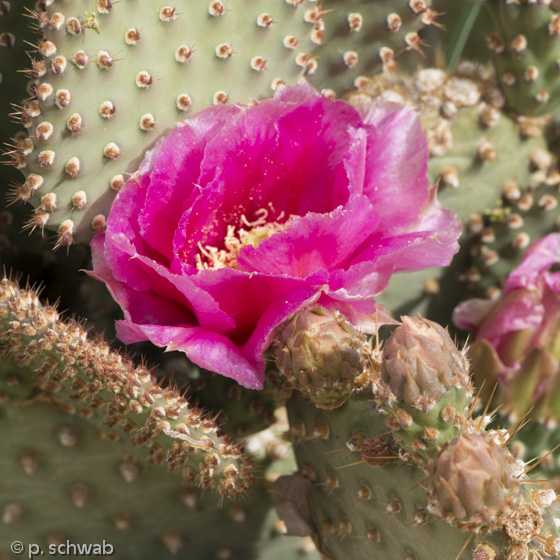 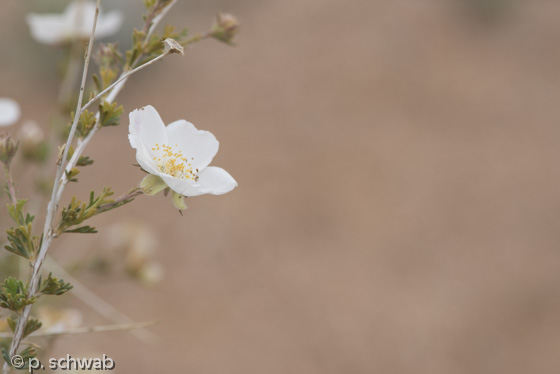 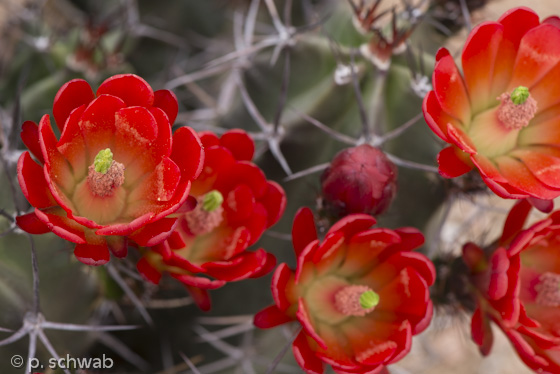 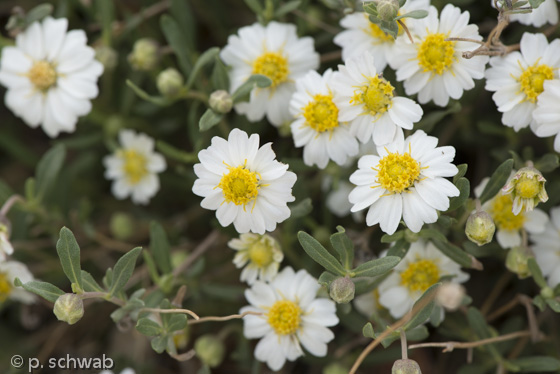 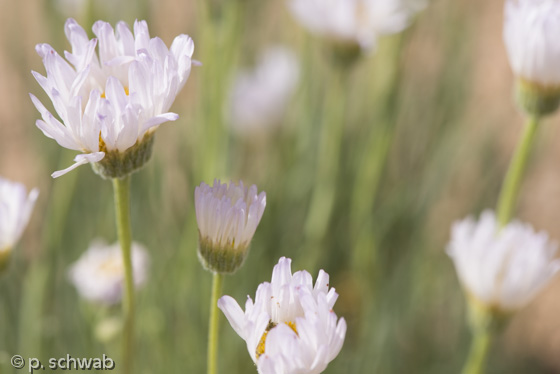 I’m spending as much time as possible outside to enjoy the display. Soon the crispy days will be here. Everything will go into the second season of dormancy, and I, too, will retreat from the burning orb. By the way, I’m not the only one taking advantage – lots of buzzing activity around here. 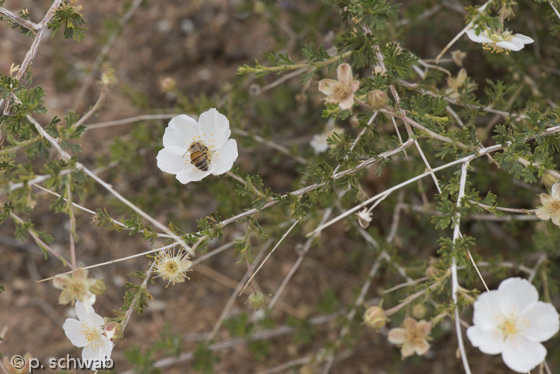 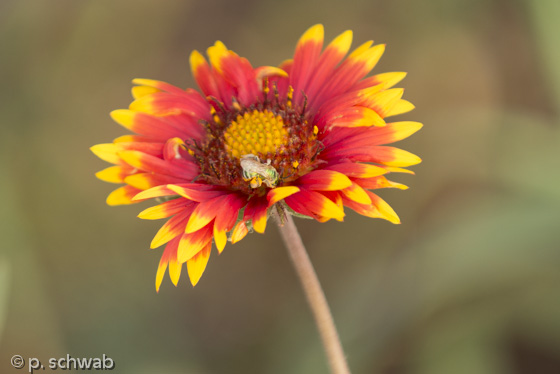 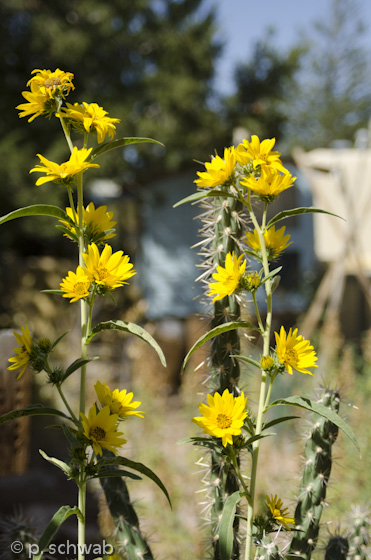 Yup, It’s that time of year already. Monsoon season has come and gone, without delivering any significant rain, and the skies have returned to the magnificent NM blue that sets off the Maximillian sunflower so nicely. Wait a minute, here’s a better example: 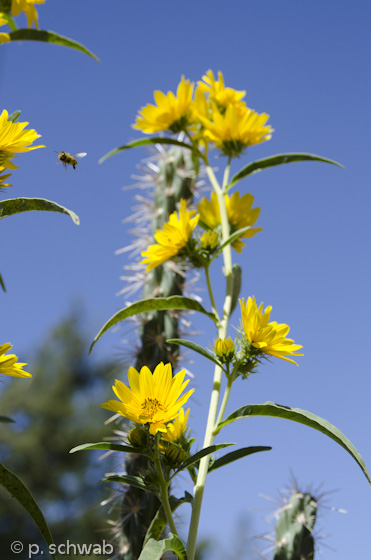 This spring I moved my Maximillian down slope to the edge of the drainage swale and, thanks to this damper site, the stalks have actually reached 5′ tall (as opposed to the stunted 3′ tall stalks of the previous years). I do give it a bit of extra water occasionally – about once per month I’ll give it a drink if I’m walking by with the watering can. This new location is also very handy as the neighboring cholla grabs the stalks when the wind blows and keeps them standing. I also like the way it looks – the cheery yellow flowers among the spikes. Two weeks ago I added a sporobolus wrightii to the grouping. I’m imagining the giant billowing grass will be a nice addition to the tableau.

With the summer heat upon us and monsoon season still a month away, saturation of color in the garden is fading. Everything is taking on the same dusty tint, except for a few impressive stalwarts:

Thanks to May Dreams Gardens for hosting Bloom Day! 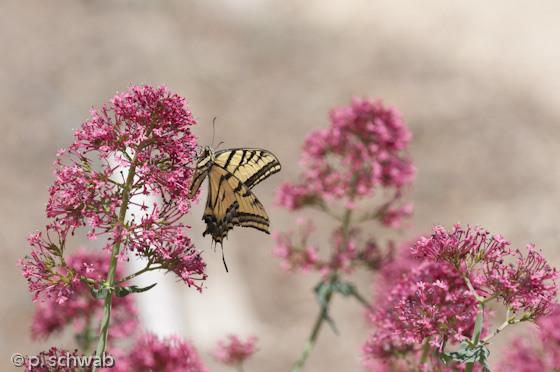 I spotted the first swallowtail in the garden yesterday on the Centranthus ruber which, by the way, does great in my garden with some afternoon shade and only a bit of extra water during the hottest and driest days of June and July. 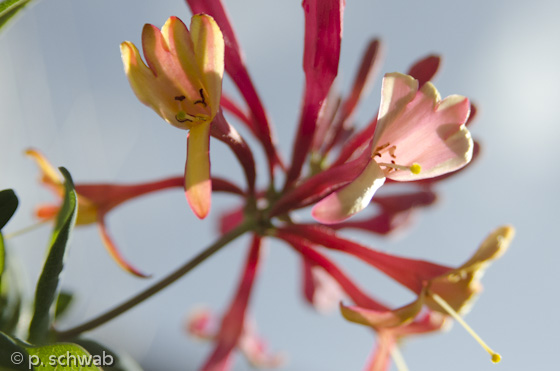 Thanks to the spring snow and rain, the Gold Flame Honeysuckle is putting on a fierce blooming display right now. It is also growing like mad, and has completely regained the stature it lost during the summer heat and drought. Since it is downstream from the rain barrel overflow, I seldom need to water it (or rather, I refuse to water it, which is why it was so diminished after the rough summer), but since it is planted on the north side of the wall behind my studio, the roots are completely shaded, which also helps. The top, however, gets almost all day sun which is why the blooms glow so in the late afternoon sun.

Green is breaking out everywhere (or rather, where ever the chickens haven’t found it). 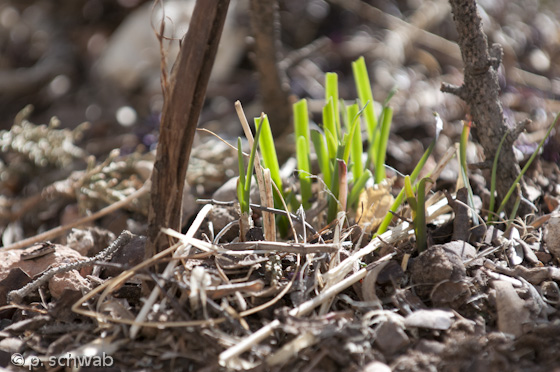 Buds are starting to break on the deciduous shrubs. 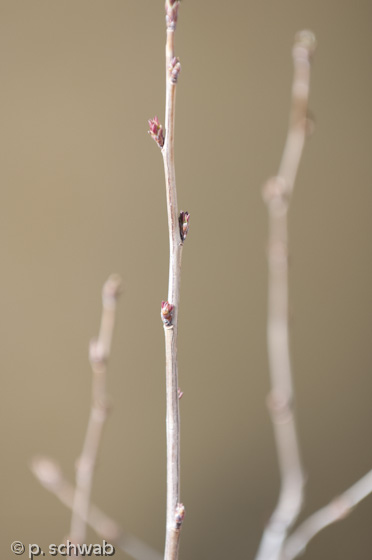 And the semi-evergreen are exhibiting more green than semi. 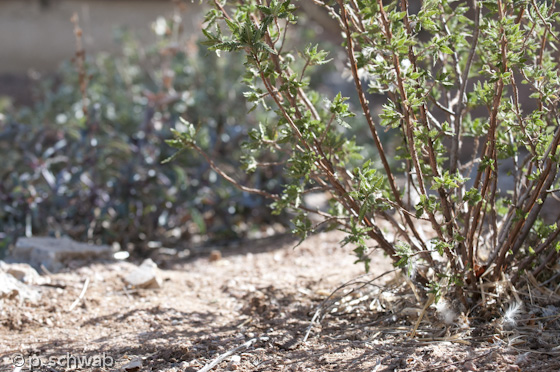 Yesterday there was a welcome lull in the spring winds, which seem to have arrived extra-early, so I ran around trying to catch up on garden maintenance. In general, I don’t really do much maintenance – fer sure Less is More would never be described as manicured – but with the earliest of the spring bloomers starting to put out new growth, I trimmed back last years spent flowers and raked up the leaves and pine needles that I had allowed to mulch in around the shrubs during the fall and winter. I’ve also been tackling some transplanting and dividing. I like to do the transplanting while the plants are still dormant, or at least not growing much, if I can, as it reduces transplant stress and  provides more time for the plants to get re-established before the May heat sets in. This year I’m dispersing the perennials from the circle-o-cottage garden in order to make room for another kitchen garden bed. Strangely enough, this slightly sunken garden bed was actually too successful in collecting runoff. The penstemon were getting too much water and were suffering a bit. Hopefully they will be happier in the front yard among the other dry-loving natives. Hopefully. Hopefully there will also be a little bit of spring rain this year, since inevitably, at some point, I’ll forget to grace these struggling little nubbins with the watering can. Yes, from too much water, to too little, I seem to do my best to ensure all the plants are really abused.